The 2023 Bimota KB is a motorcycle built by the Italian motorcycle manufacturer Bimota. The Bimota KB 2023 is the machine to emerge from the current management of Bimota, with the company largely owned by Kawasaki. The Bimota KB marks a return to the traditional denomination and a recipe much closer to the plan of the original business of the company.

It had long been certain that Bimota would use Kawasaki’s Z1000 SX drive for KB. With 142 PS and 111 Nm from 1,043 cubic meters, it has a lot of juice. The full chassis of the KB has changed significantly, and that’s no surprise either. At 1,390 millimeters, the wheelbase is 50 millimeters shorter than the SX. That would make it clear, that KB looks like a car. This allows for a very short and light rear frame. The KB will be a very light bike for the whole Bimota. The Bimota KB weighs 194 kilos with a full tank, which makes it 41 kilos lighter than the Kawasaki.

The 2023 Bimota KB uses a tubular steel front panel section, combined with a rocker alloy pivot piece and a carbon fiber side panel, and is much lighter than the Ninja 1000SX from which it borrows the engine. The latest documents show that the approved weight of the Bimota, with a fuel tank, is only 194 kg. This is 41 kg lighter than the Ninja 1000SX in the same condition. The gear which leads to an identical top speed of 155 mph, but the Bimota KB is sure to get there much faster. And on the corners, its dimensions suggest that it will knock down the heavier Kawasaki, not to mention many more powerful superbikes. The Bimota KB wheelbase is 1390 mm, less than 1440 mm from the Ninja, along with a 50 mm reduction in overall length and the same width reduction. The engine can be moved closer to the front wheel, allowing a more skewed forward weight distribution. 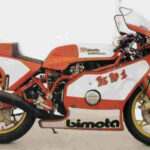 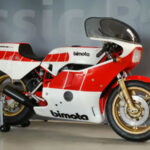 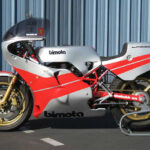 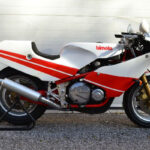 The Bimota KB can maintain a desirable long tilt while reducing the wheelbase and increasing the steering head angle. Although the radiator under the seat has not yet been confirmed, it should be noted that while posting pictures of the bike under test, Bimota did not give a clear view of the rear, where the radiator would be visible if it were mounted. under the seat. Evidence of the rad under the seat grows even more when looking at the unusually thick rear clamp, which would be needed with a rad under the seat to make sure no mud and stones are thrown at the fragile fins of the radiator. On some bikes, especially the Benelli Tornado, which was the last superbike to use a radiator under the seat, this problem is offset by the use of radiator exhaust pipes, but Bimota KB doesn’t seem to take that route, perhaps because it would make the seat unit bigger.

The front tire is a telescopic fork with 130mm travel. The rare tire swingarm and shock absorber with 122mm travel. The front is guided by a conventional USD fork, with no semi-active controls. Things get even more interesting in the back, the aluminum swingarm can be adjusted by an eccentric bearing to the pivot point, which could explain the unconventional position of the shock absorber on the swingarm: look backward and appears to be eccentrically mounted at the rear. upper screw eye. Braking is provided by two discs at the front and one disc at the rear. At the back is an electronically adjustable Ohlins monoshock.

The 2023 Bimota KB is powered by a 4-cylinder inline four-cylinder engine derived from the Kawasaki Z 1000 SX. The KB uses the Kawasaki Z1000’s 1,043 cc engine that produces 142 hp and 111 Nm. Bimota KB engine is one of the sweetest in Kawasaki’s portfolio and has great firepower to propel a motorcycle at ridiculous speeds. However, except for the engine, the rest of KB seems to be entirely the work of Bimota engineers. So you can expect great configuration and handling of the motorcycle chassis. Bimota has also refrained from incorporating the exotic steering system in the center of the H2 Tesi cube and has instead opted for a relatively conventional USD fork at the front and a single shock absorber at the rear.

They are expected to be fully adjustable units manufactured by Ohlins. Also visible in the representation are the Brembo radial mounting clamps, possibly the Stylema top shelf or the Monobloc M50. One of the great attractions of any Bimota is its style and the representation suggests that it will be modern and adopts a retro design. The bubble-shaped fairing, the rounded headlight, the folds in the tank, and the tail section are inspired by the Bimota KB series from the 70s and 80s. The red and white paint scheme, with the golden stripes, adds a touchback. At first glance, no refrigerator disturbs the view of the collector system. The Kawa four is not air-cooled the radiator is located under the hump, directly above the rear wheel, and cooling air is supplied through the side air ducts.