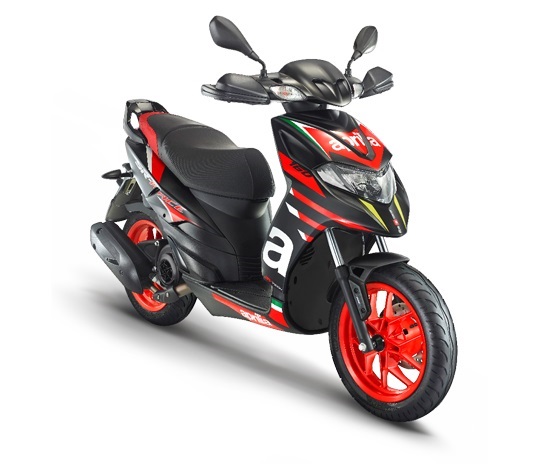 The Aprilia Atlantic is physically a large scooter but it’s actually quite light for a maxi-scooter. It tips the scales at 425 pounds and ends up just over 450 pounds once you include fluids and the free top case. For comparison, Suzuki’s Burgman 650 and Honda’s Silverwing also have 63-inch wheelbases but are much heavier at 610 pounds and 540 pounds respectively. In terms of storage, the Atlantic has enough space under the saddle for two helmets. There is also a large glove box with a power outlet and a small compartment at the base of the handlebars. All of these compartments are centrally unlocked by the ignition switch, which is nice. 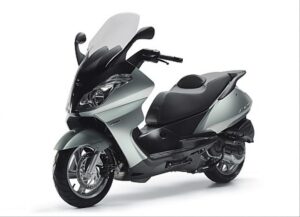 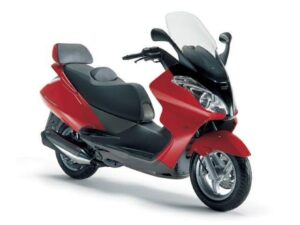 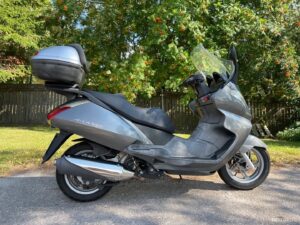 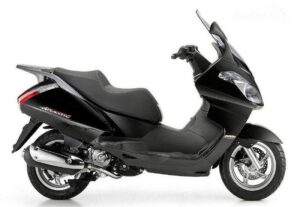 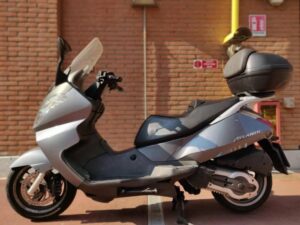 The Atlantic was the first maxi-scooter to be sold in North America with its debut in 2001. In typical Aprilia fashion, the Atlantic differentiated itself through the use of advanced technology. The Aprilia Atlantic featured a neat, high-performance trip computer that provides more information than you ever imagined. The computer will tell you fuel consumption, time, maintenance due, battery charge level, average and top speeds, ambient temperature, Onboard diagnostics, and more. The Aprilia Atlantic also outshines the competition with the use of a steering damper and a 15-inch  front wheel to make the Atlantic a confident handling bike for what it is. The front forks are also large in diameter and the rear shocks are adjustable twin gas shocks.

In terms of performance, the Atlantic uses a Piaggio 460cc engine that shines in both fuel economy and power for its size. That’s more displacement than the Burgman 400, but a bit smaller than the engines in the Silverwing and Burgman 650. The 460cc engine used in the Atlantic is 39 bhp which makes for great acceleration in a machine as light and a top speed close to 100 mph. It’s hard to argue that you need more power than that, although serious touring enthusiasts might disagree. This engine was also used in Piaggio’s X9 and it has survived for the past few years inside the Scarabeo 500 scooter. of 40 mph. It can be a big difference if you are driving a lot of miles.

The Atlantic engine is a Piaggio derivative but has a different control unit for injection. It is a single-cylinder four-stroke with four-valve distribution controlled by an overhead camshaft liquid cooling, 92 x 69 mm bore and stroke, 458.7 cc displacement, 10.5: 1 compression ratio wet-sump lubrication with trochoidal pump. It delivers 39 HP  at 7,250 rpm and a maximum torque of 40 Nm at 5,500 rpm, capable of making the Atlantic reach a maximum speed of 150 km / h. The fuel is powered by electronic injection with a Marelli injector, the tank has a capacity of 16 liters. Stainless steel exhaust with a catalytic converter; Euro 2 homologation. The braking system consists of two 260 mm diameter discs at the front and 220 mm single discs at the rear.